Brother Buzz has been rockin’ San Francisco and environs for over 30 years. The band consistently gets high marks for variety, energy, enthusiasm, and for being just plain fun. Tight but not too tight, they lay down the best of America’s roots music, rock ‘n’ roll, R&B, funk, and blues. All members sing when prompted, so besides good rockin’, they also dish up plenty of variety. Brother Buzz has performed at the Pacifica Fog Festival, San Mateo County Fair, Millbrae Art & Wine Festival, and for Pacifica Performances, as well as at various clubs in the Bay Area and many a happy wedding and birthday party. 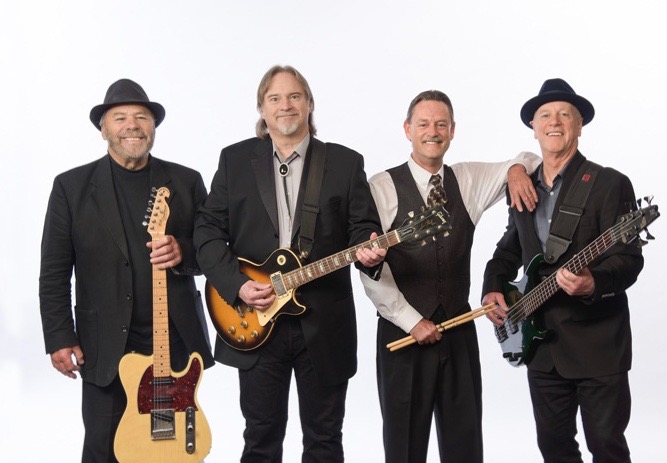 Jumpin’ John Hall: Guitar, harmonica, vocals. John served his apprenticeship playing in both original and cover bands around the Bay Area until meeting Drummer emeritus Roy McKinney in 1987. John’s playing is steeped in the tradition of players such as Chuck Berry, Eric Clapton, and BB King as well as modern blues players like Stevie Ray Vaughn and Robben Ford. John also plays and sings in Wall of Blues and Tonal Recall.

Blazin’ Bob Noto: Guitar, bass, vocals, percussion. Brother Buzz’s own King of Cool, Bob Noto spent many years playing lead guitar for The Ethics and he toured with The Coasters. A master of many styles, Bob is as comfortable laying down swingin’ jazz accompaniments as he is playing rock or blues. Bob also plays with Pat Ward in Red Vinyl.

Tom McManus: Bass, vocals. Tom’s first band experience was on drums with a rock band. While still in high school he switched to bass and has been laying down a solid bottom end while contributing soulful vocals in a variety of pop, rock, blues and jazz styles ever since. Playing as a founding member of the eclectic sounding Promised Land was a formative experience in covering music as diverse as that of Motown, Rolling Stones, Steely Dan, the Grateful Dead, Allman Brothers Band, and the band’s originals. Tom acquired a solid grounding in the blues with the Tommy Meisel Blues Band, and has covered Roots/Americana/R&B/pop styles with the bands Looking for the Good, Boogieman, Tonal Recall, and Rock Candy. Tom performed with The Mystery Cats at the first two Jerry Day shows at the Jerry Garcia Amphitheater in McLaren Park. Currently, Tom also holds down the low end with Phil McGee and Friends, and Norman Collins and the Tumblers.

For more information about the band, including recordings, go to the Brother Buzz website. Accept no imitations.