Jim Moore is a Pacifica singer/songwriter, working and teaching in Pacifica. Jim’s songwriting credits include tunes recorded by Bobby Hendricks of the Drifters, and soul singer Jerry Brooks. Jim worked with, and wrote songs for, Kristy Lee Cook from American Idol fame. At Christmas time, you can hear his song "Haulin’ Mistletoe" (MCA Records) on radio stations all around the world. 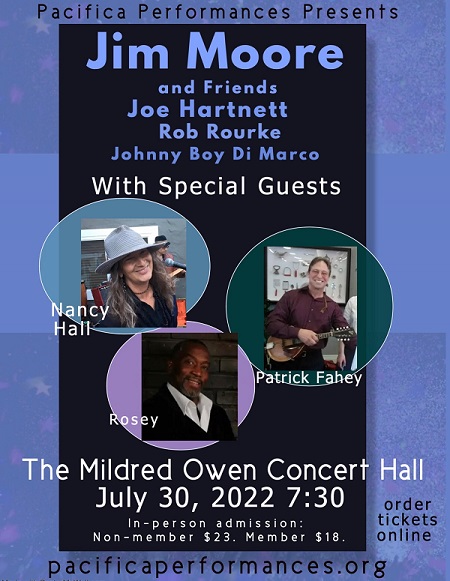 Jim’s passion is singing and songwriting, but he also loves to perform and play guitar.

Joe Hartnett is a phenomenal Harmonica player as well as a superb Pedal Steel player and Singer.

Rob Rourke, a veteran musician, will be playing Guitar, Ukulele, and Dobro.

Johnny Di Marco is the band’s right hand man and will be on Percussion.

Nancy Hall – singer/songwriter. She is a professional musician on stage and in the recording studio. Her band is The Curios. She has performed around the world, including a world tour as a backup singer to Neil Young.

Rosey is a wonderful Gospel Soul Singer and close personal friend to Jim and the Band.

Visit Jim’s website here. While you’re there, check out the videos of his various bands.